Watching your children growing up is one of life’s pleasures. But sometimes you have things left over from their younger days, that you don’t want to throw out! Hold on to any left over nappies, and put them with two shoe boxes to make a pretty doll’s pram. Very easy to make, and your little ones will be thrilled!

1. Place one of the shoe boxes standing vertically inside the other as shown. Then cut the vertical box to make it about one quarter shorter. 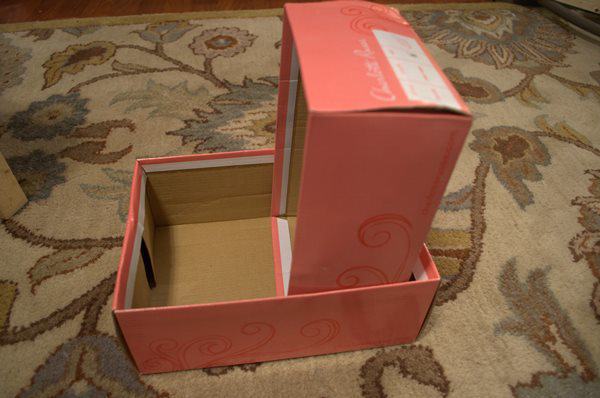 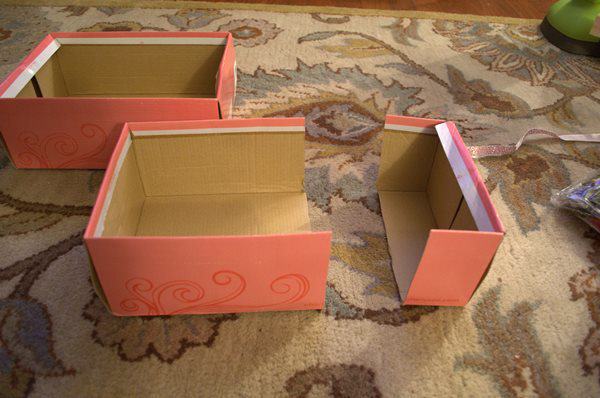 2. Replace the box that you have cut and stick it in place with some glue. 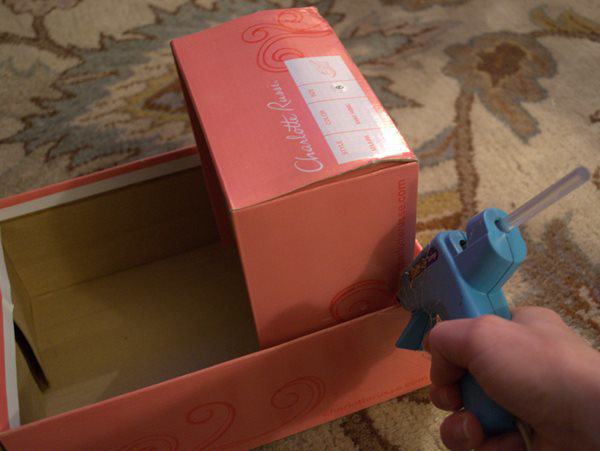 3. Decorate the inside and outside of the box with your material.

4. Place the large elastic around the base shoe box. Use the glue gun to stick it to the box at each end. Be sure to use an elastic that is big enough that it doesn’t cling tightly to the box. 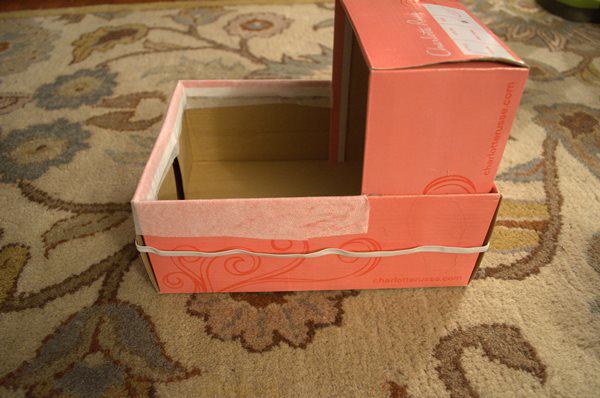 5. Now for the nappies: You need to roll each nappy into a cylinder. When you have each nappy tightly rolled, keep it in place with a small elastic. 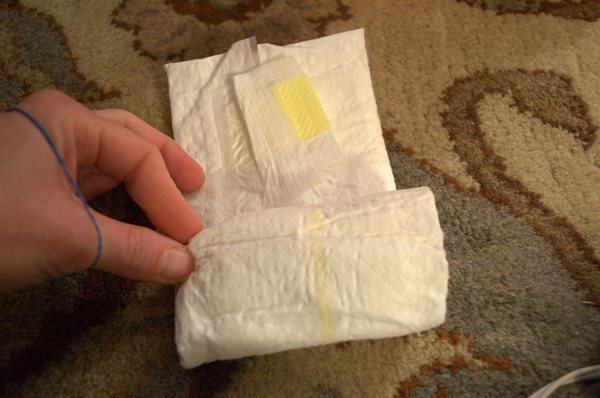 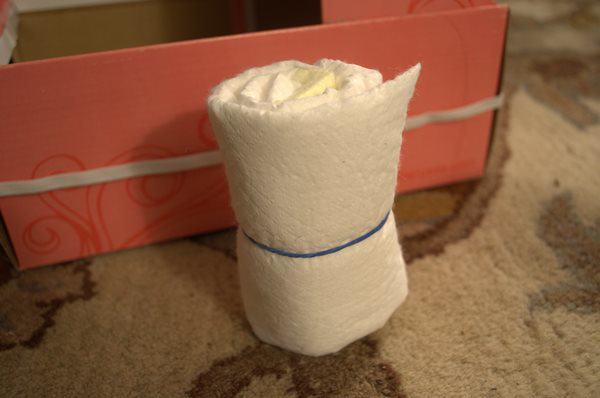 6. Once you have rolled all the nappies, you can start to place them around the outside of the box, keeping them in place with the large elastic. You will need around twenty to cover the entire box. 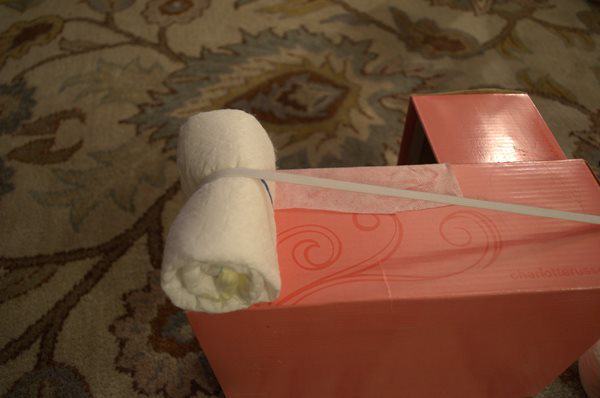 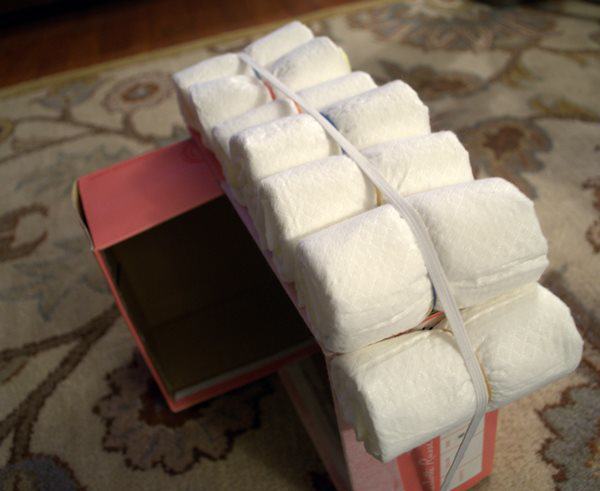 7. With the aid of a glue gun, stick the nappies to the elastic with a few dots of glue. 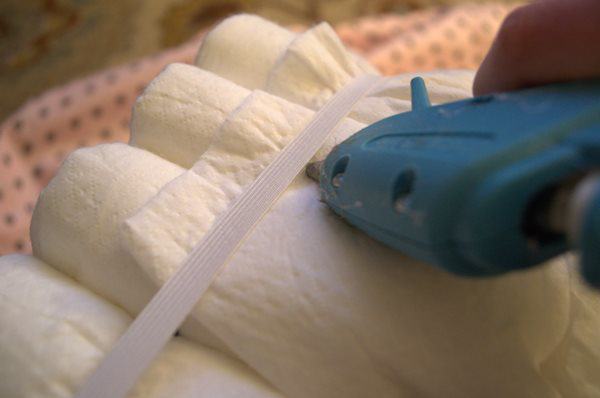 8. To make the hood of the pram, open out two nappies and place them over the top of the vertical box. Hold them in place with a little glue. Next cover them with a third nappy to improve the appearance. 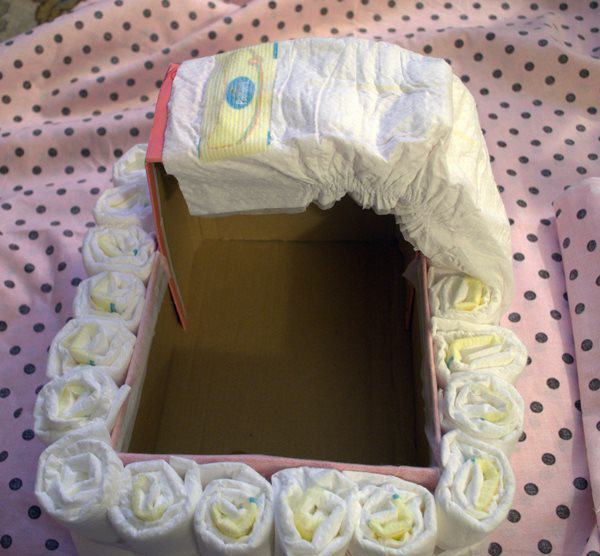 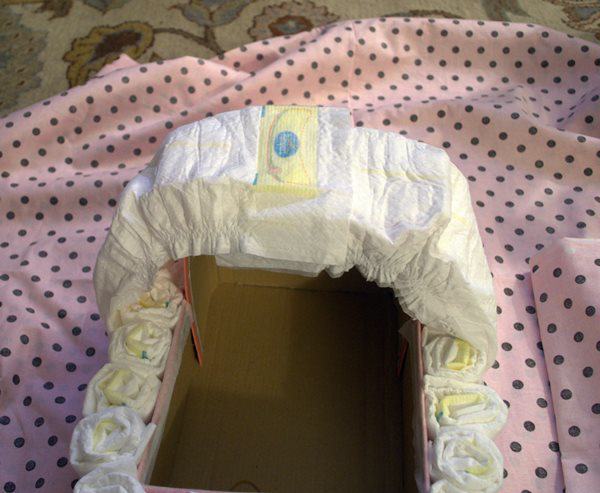 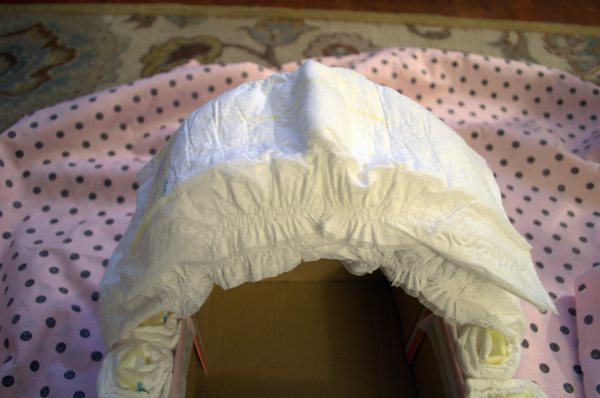 9. Now, decorate the pram by placing a ribbon made of material around the nappies that surround the base box. 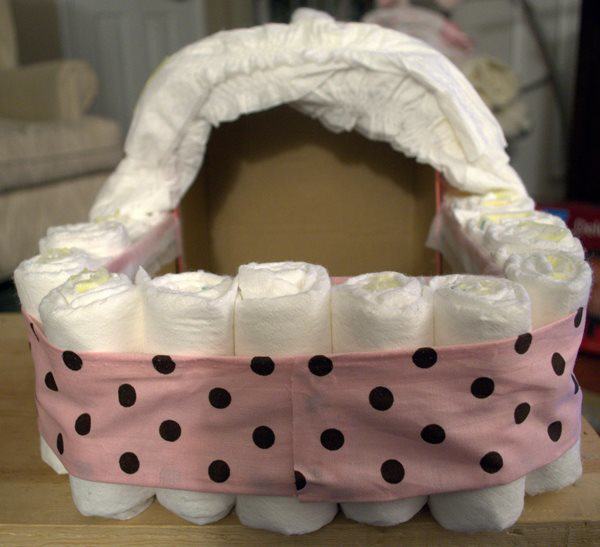 10. You can create pretty bows to decorate the front of the pram. Form an X with a band of material, and pinch the centre of the X. Take strip of ribbon and roll it around the centre of your X, holding it in place with a little glue. Glue the ribbon to the pram. You can also make a second identical one that you put on the hood of the pram. 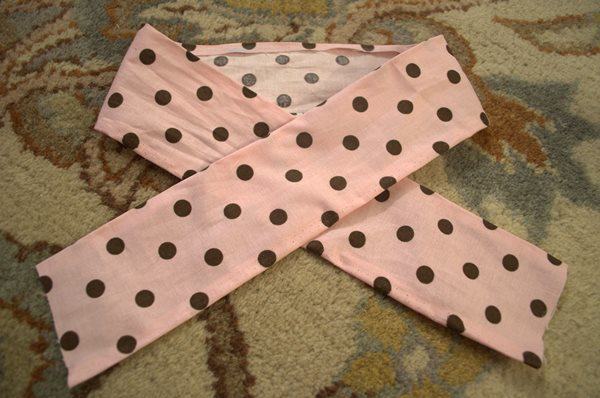 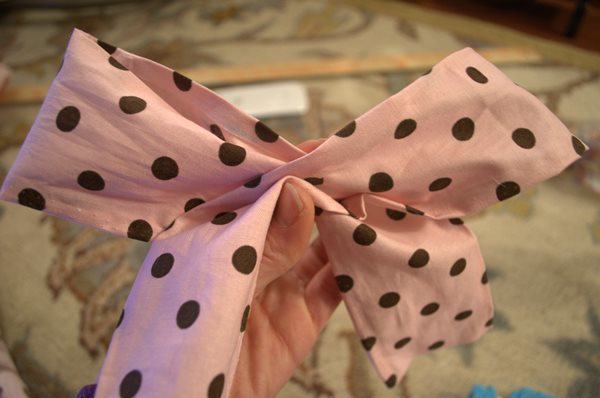 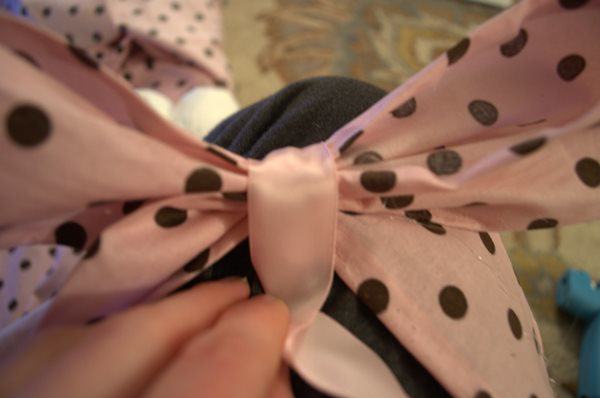 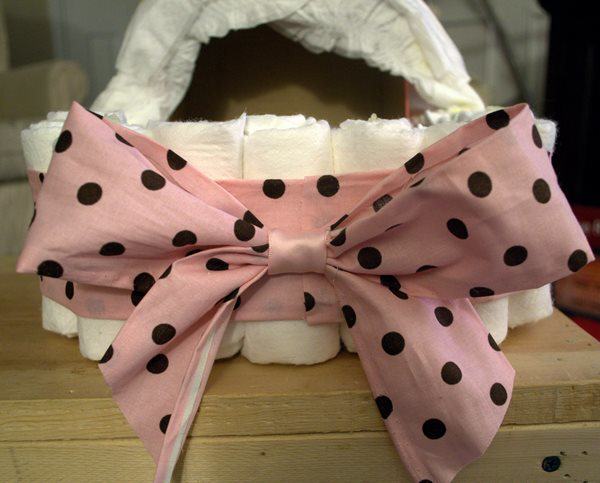 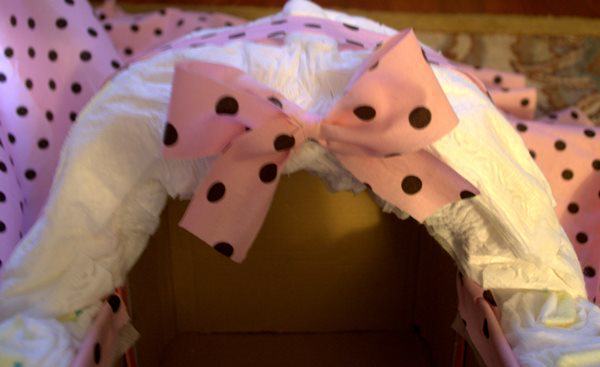 11. With the help of another band of material, decorate the pram by wrapping the material around the vertical part. Hold it in place with glue. 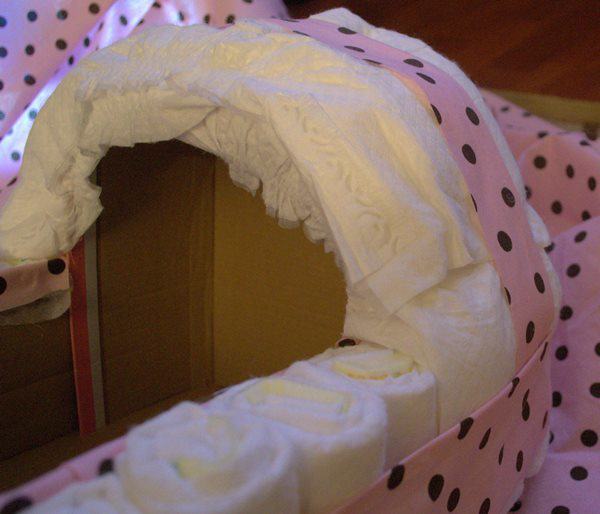 12. Finally, to make the wheels of the pram, you will need 16 nappies. Take four rolled nappies and attach them together with a strip of material. 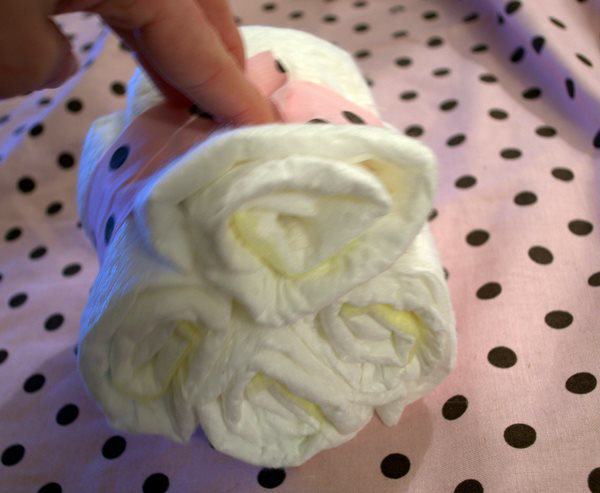 13. Glue the wheels to the base of your pram. 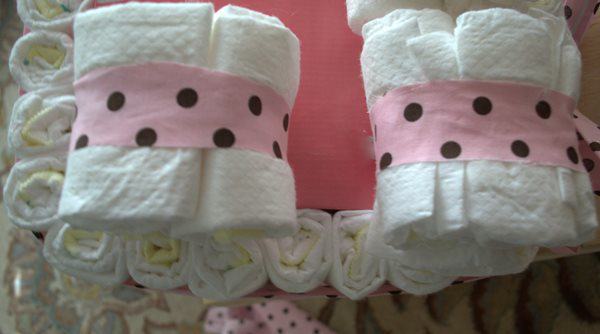 And there you have it! Your pretty pram is made! All you have left to do is add a few of your children’s dolls! You can also fill the pram with nappies and give it as a Christening present! 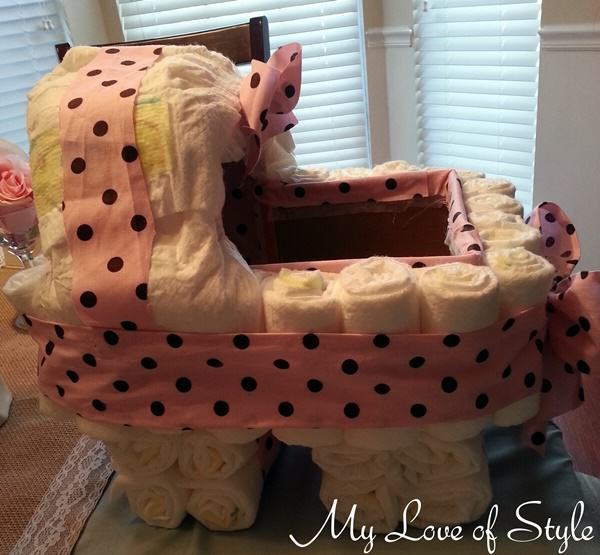 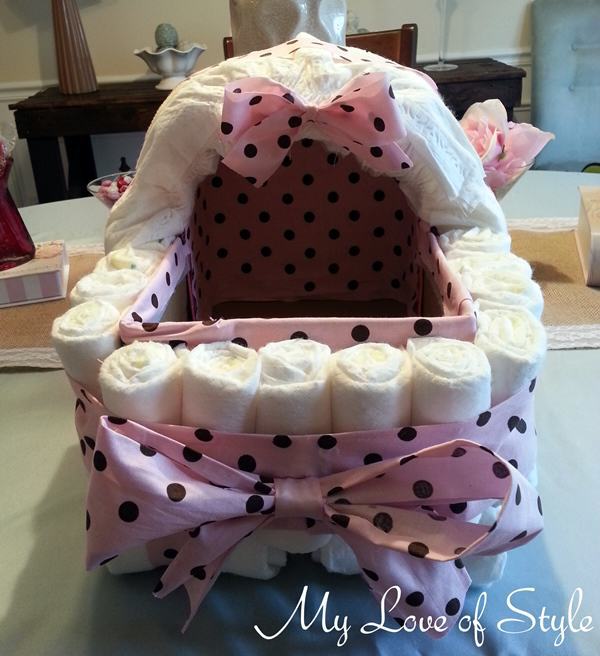 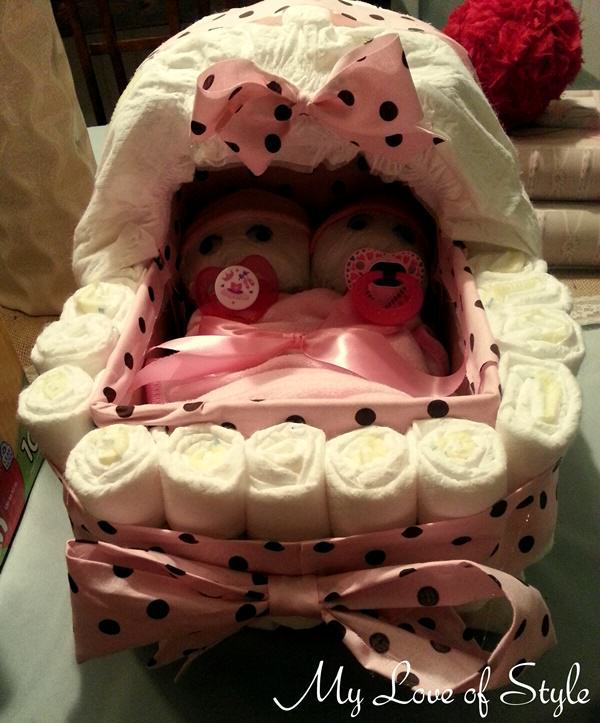 More From: Crafts and DIY