The family that live in this little house in the Yarra Valley in Australia is made up of Murray Goodchild, a beekeeper, his wife Vicky, a yoga teacher, and their four year old daughter. Don’t be fooled by the small size of their house on wheels! Measuring 10 m² on a 5 m² platform, in the heart of a 4 hectare plot of land, it was finished in full for a cost of 8,215 euro (solar panels and plumbing included). This home contains everything that is needed: a living room, a kitchen, a bathroom with a bath, two gorgeous bedrooms and an office/relaxing space. Limited by a small budget, the construction of this “tiny house” was partly a choice and partly a philosophy: “Vicky and I have a modest income… We try to live simply and to do the things we love.”

Having been obliged to leave their previous apartment, they did not have the means to buy a traditional home, nor did they want to rent: “It is money down the drain and you have no security that you will be able to stay in the same place for a long time.” They met the owner of a tiny house, which changed everything for the family: “I believe that we only really need a small amount of space to live an amazingly rich life….. It was so obvious in the situation we found ourselves in.” A few hours of internet research helped them develop a project that suited them. They moved on to the building stage, asking themselves at every stage “Can I do it myself? What alternative solutions can I find?” They started in March 2015 and they finished the project approximately one year later.

A few photos of their home 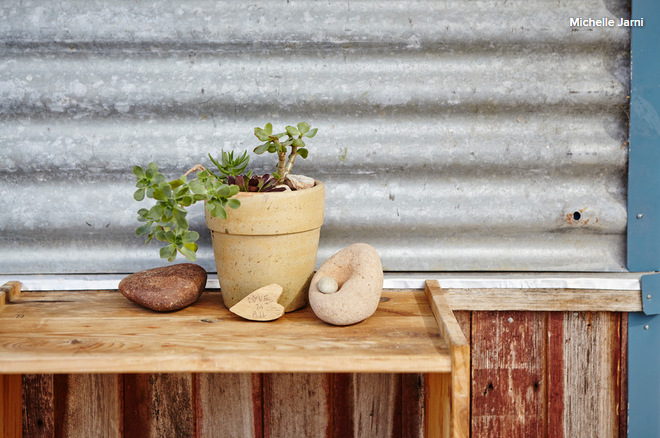 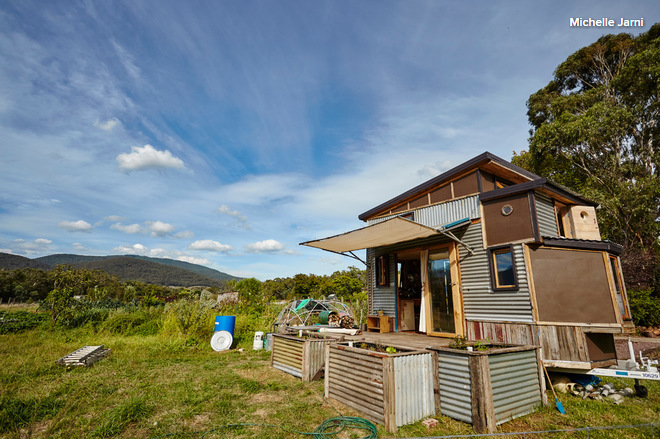 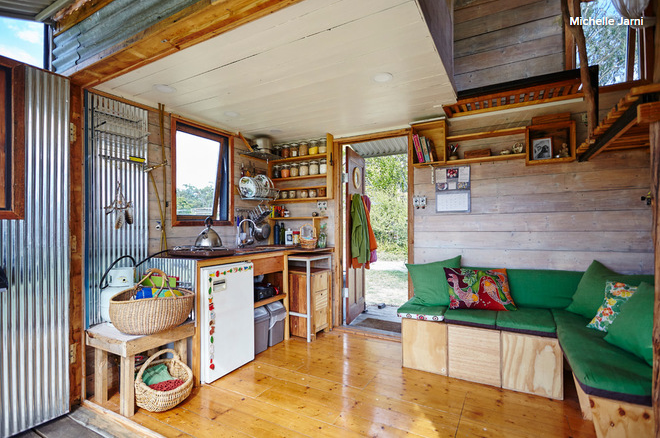 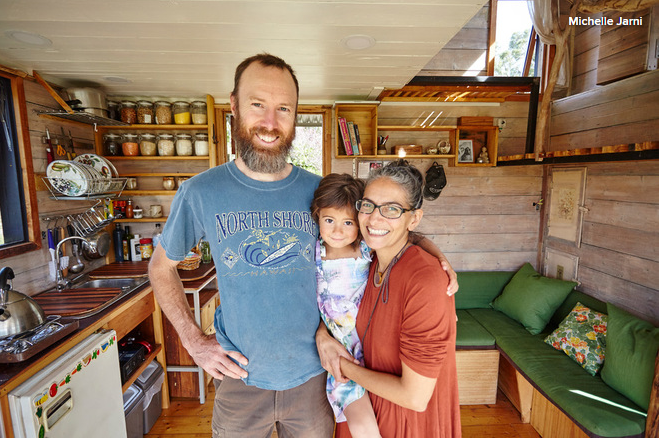 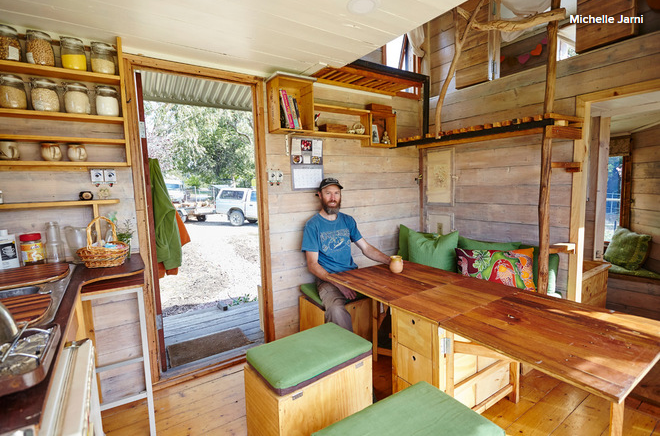 The house is 4.5 m in height and has an upstairs and a mezzanine. To avoid losing light, Murray employed the use of wooden grills.

“After a last minute change, I found a way to allow the space to breathe… There are wooden grills above the couch, which support the upstairs floor. And as the laths allow the light to pass through, we don’t feel couped up when we are downstairs sitting on the couch. I had never seen that anywhere before.”

The banister, made from driftwood, was added for safety, but adds plenty of charm. 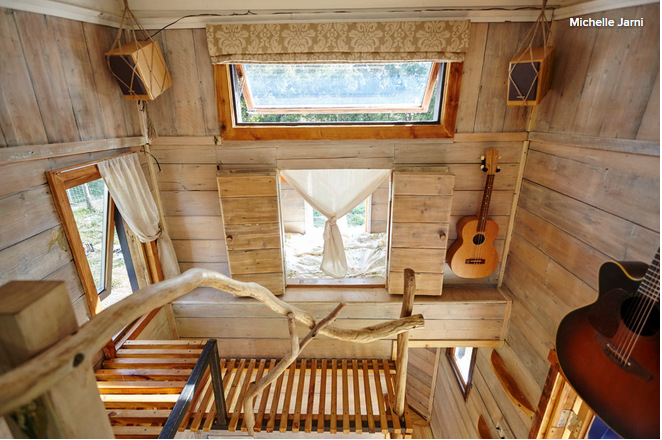 Despite the small size of the house, they did not compromise on comfort, as can be seen in the 2 pretty bedrooms. And the view is simply extraordinary. 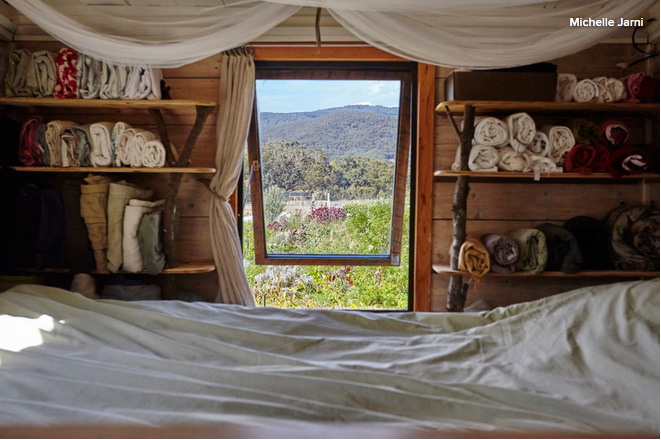 As Murray remarked, “I love sitting on the bed on the mezzanine because the air that circulates is incredible, and you feel completely cut off from the world, as if you’re on top of a tree.” 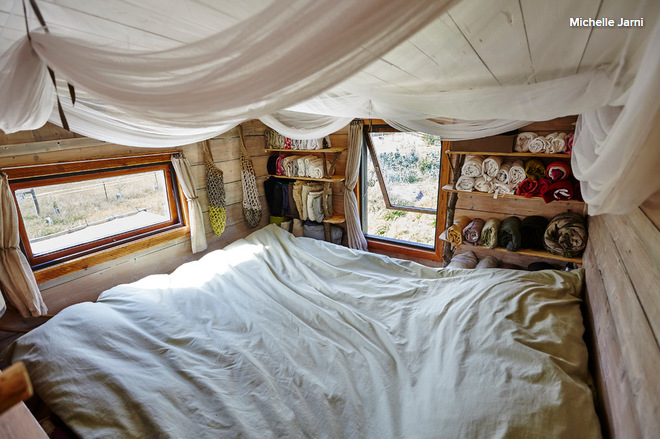 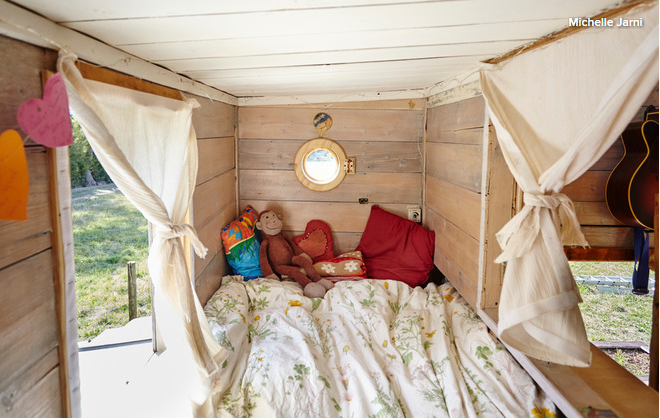 The family learned many skills, including plumbing, which was highly necessary for installing the shower with a deep Japanese bath.

The water supplied to this amazing system comes from an external rain water tank which is heated with wood. 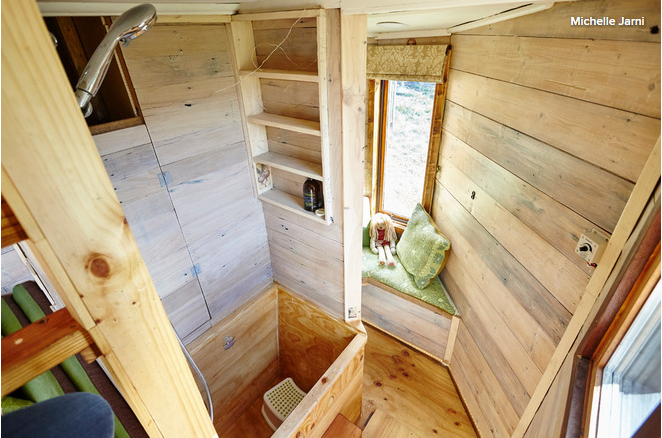 Everything has several uses and is optimised to the max, like this unit for storing toys and other objects, which also serves as a stairs to the mezzanine for their daughter Grace.

The wood used all over the house gives it the aspect of a real little hut. But they did not compromise on safety: “As I have a four year old child, I always had to take into account how Grace was going to manage all the aspects of the house. I asked myself if she would able to open the trap door of her bedroom herself, or if the steps leading up there were adapted to her size.” 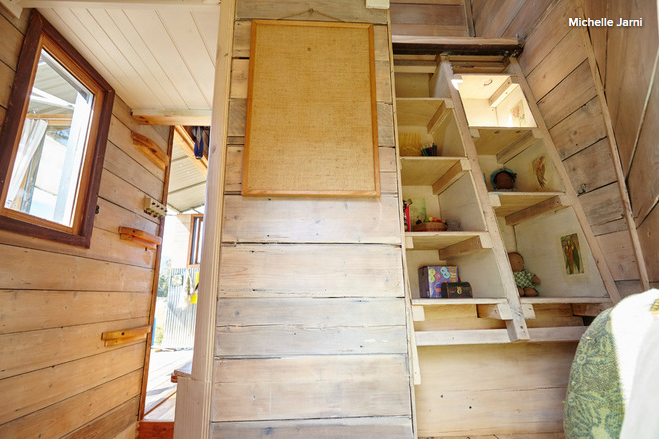 In terms of the exterior, the family have a fabulous terrace, and installed their home on a large plot of farmland.

Their chickens and their land allows them to live more self-sufficiently, and their solar panels (installed with the help of a friend) help them live more ecologically. They can also go for leisure walks in the beautiful green countryside that surrounds them. 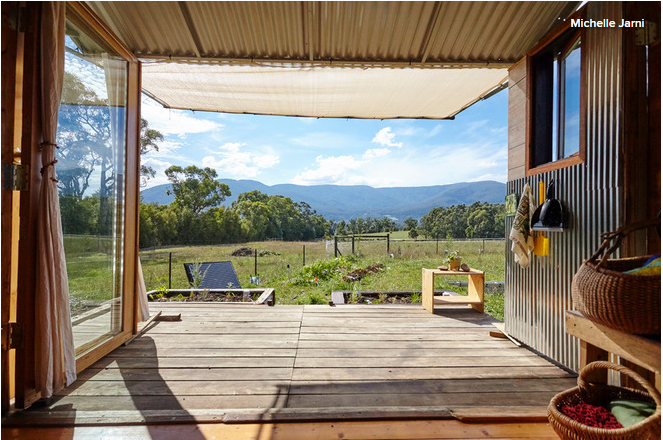 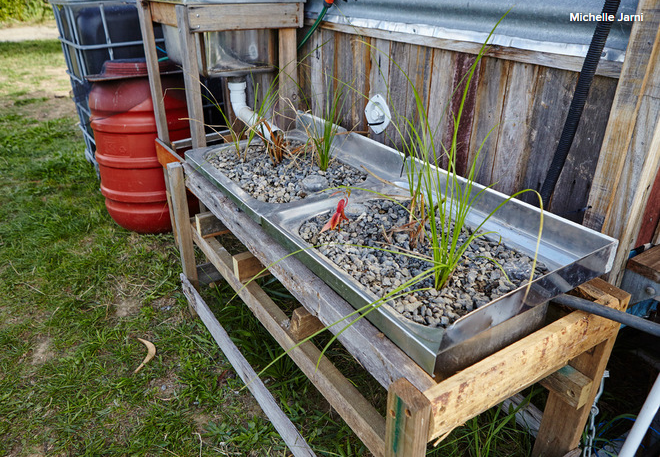 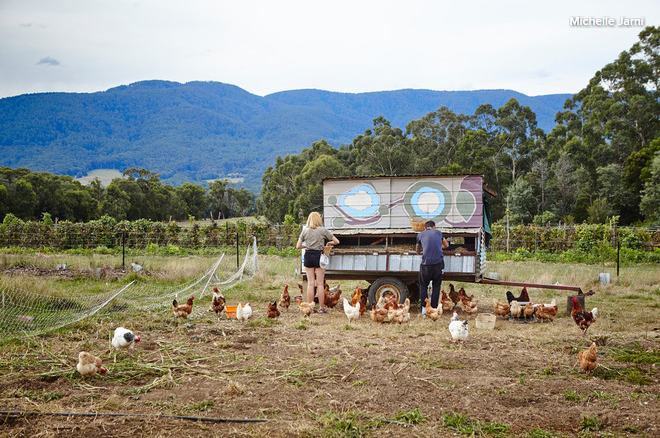 Overall, the family are very satisfied with their home, and as Murray says, he also has “plenty of opportunities to pass the time outdoors, and enough space to feel sheltered, protected and nourished. I see the house as an interface with the world, and not an attempt to contain the whole world between its four walls.”